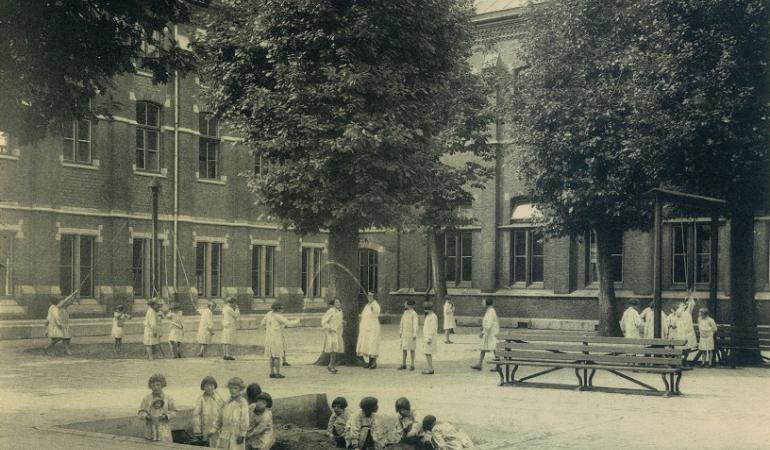 About the rich and the poor

From the early Middle Ages until the eleventh century, the church was in charge of providing relief to the poor, the sick, orphans, widows and the elderly. The needy, pilgrims and vagrants were fed and given a place to sleep in convents.

Poverty was considered normal in medieval society. The poor could not help it that they were poor. And the rich had a fast track to heaven by donating to the poor.

Things changed from the twelfth century onwards as more and more people moved from rural communities to the city, which the rich urbanites considered a threat. To prevent social unrest and epidemics, these rich citizens founded almshouses where the needy were offered temporary accommodation.

The fourteenth century was a period of catastrophic famine, followed by outbreaks of the plague. It was the poor who were hard hit, because of malnutrition, poor accommodation or even a lack of housing altogether.

During these turbulent years, around 1350, a wealthy German merchant named Hendrik Suderman founded a hospice for poor girls and women in the location of St. Elisabeth’s Hospice. The institution was called the Womens’ House. At the time, Lange Gasthuisstraat was still located in a rural area outside the city walls. Suderman ensured that the Womens’ House could continue to exist after his death. Unfortunately, the shelter had only seven beds and women and their children could spend one night here, and would “each be given a bowl of thick soup or stew”. Suderman’s efforts were a mere drop in the ocean.

These were dangerous times, with hordes of refugees on the move. There was no work, no food. Beggars flooded the cities, which were far from happy about this evolution. Around 1450, begging was prohibited by law and treated as a crime. Work became compulsory. There was a huge imbalance, however, between the demand for labour and the available workforce. As a result, wages plummeted and those who were employed also found it difficult to make ends meet.

Those who were caught begging were sentenced to the pillory, the stocks or a flogging. They would be expelled from the city or worse. This did not improve matters much, as hordes of beggars moved from one city to the next, in search of some food or work. Often poor parents would cast out their children because they were unable to feed them.

Jan Van der Meeren, a ‘cruydenier’ who had made a fortune selling spices, soon realised to which dangers poor (orphaned) girls were exposed. When his third wife died, leaving him with 11 young children to care for, he decided to establish an orphanage for poor orphaned girls, a ‘maegdeckenshuys’. In 1552, a new building was built next to the Women’s House with the money he donated.

The almoners, or administrators, were paid an annuity to run the orphanage, albeit according to his stipulations: the girls had to receive good care and education. And that is how the Maidens’ House was established.

In time, the buildings of the women’s house were added to the maidens’ house. The heirs of Gilbert Van Schoonbeke (1519 – 1556) donated their father’s entire inheritance to the Maidens’ House in 1633, which included cash, land and property, allowing the maidens’ house to expand its operations.

It was after this major renovation and extension that the present-day white stone façade of the Maidens’ House was built.

The Maidens’ House could now accommodate one hundred children. They had a place to live, were fed and educated. They learnt how to read, write – even in French! – and do arithmetic. They were also taught sewing, lace-making, spinning, how to do laundry and cooking. And they had to go to church on Sundays. If they were deemed sufficiently educated, they were sent to work as a maid for a middle-class family.

A similar orphanage was built for boys in Paardenmarkt, called “Knechtjeshuis”. Here they learnt different trades. Under Napoleon’s rule, the French army even recruited young boys there for the French military academy in Versailles.

The Maidens’ House also experienced difficult times. During some periods, the girls were mainly used as cheap labour. Their embroidery and lace were sold to pay for the cost of their upkeep. In the eighteenth century, everything was geared towards production leaving the girls no time to learn anything else. There was no fun to be had, no leisure. What’s more, all the embroidery and lace-making was very unhealthy. The girls would spend the whole day, from early morning until late in the evening indoors, crouched over their work in the workhouse.

Fortunately things changed in the nineteenth century and education was deemed more important than production again. The nuns of Our Lady of Namur were now in charge and the institution became a clean and orderly place. But the girls would have always felt a lack of parental love.

In 1882, the Maidens’ House finally closed and the building remained vacant. The orphans moved to two large, more modern institutions, which replaced the former Maidens’ House and the Boys’ Orphanage.

In the course of the twentieth century, these two traditional orphanages were gradually replaced by smaller, and cosier institutions, with more attention to the individual child. The number of orphans also declined, as more children were placed in foster care. But that is a different story.

Over the centuries, these charitable institutions accumulated plenty art objects following donations and bequests. Rich citizens even sponsored entire churches and chapels. Around 1850, an independent committee – of which the author Hendrik Conscience was also a member - was tasked with establishing a list of all the province’s artworks. The committee soon realised that the Maidens’ House and Boys’ Orphanage in Antwerp were sitting on a fantastic collection of paintings. The administrators of the two orphanages, the Board of Civilian Almshouses, moved 84 paintings to the former chapel of the Maidens’ House, which opened in 1884 as a museum.

A few years later, the Museum of Fine Arts, which still exists today, opened in Antwerp. Most of the artworks were moved to the museum and the Board of Civilian Almshouses used the space that was freed up for its offices.

The second half of the nineteenth century – during the rapid industrialisation – gave rise to widespread poverty. Cities were overrun with people in search of food and work. In 1849, the Office of Charity – which was founded under Napoleon to control the unemployed and the poor, to assist them and ensure they found employment – paid an allowance to a whopping 39% of Antwerp’s population.

1925. The Public Poverty Commission (Commissie van Openbare Onderstand (COO)) was established after the merger of the Commission of Civilian Almshouses (which oversaw the orphanages) and the Office of Charity. As a result, the COO acquired a huge art collection, and decided to turn the chapel into a museum.

In 1930, the time had finally come. On the occasion of the World Expo in Antwerp and in the margin of an international conference on charity, the COO opened the new Maidens’ House Museum where the public could see works by such artists as Jacob Jordaens and Anthony van Dyck. The displays also included important historical documents about poor relief.

The museum has continued to expand its collection since then. The Royal Museum of Fine Arts Antwerp also returned several unique artworks to the Maidens’ House Museum over time.

The history of Antwerp’s public social welfare centre starts with the establishment of various charitable institutions in the early Middle Ages. The Maidens’ House Museum’s amazing art heritage is the reflection of this.

All the artworks relate to an aspect of Antwerp’s social history. And many of the utensils in the museum are directly linked to the history of the Maidens’ House and poor relief throughout the centuries.

The Maidens’ House Museum is a perfect example of heart-stirring heritage, about the rich and the poor.